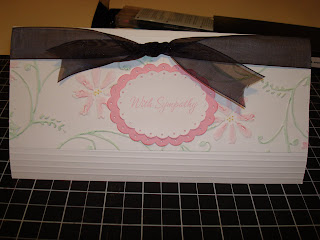 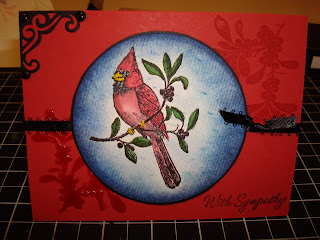 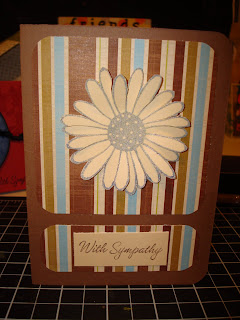 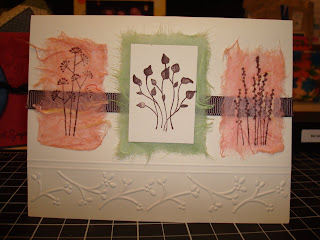 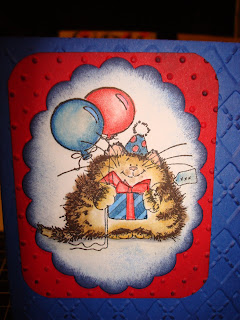 One of my family's LONG time family friends lost his wife over the weekend. I made him and his kids sympathy cards. They aren't the best, but I felt like they would appreciate something handmade. He and his wife were married 67 years. Can you even imagine? It's so rare now days to stay married for 10...I took off work today for the funeral, and gave them the cards at the dinner. I'm sure once they all get home and settled, they will look at them.

I made my secret sister from splitcoast stampers her birthday card. I'm only posting part of a picture of it, hopefully not giving away the rest of the card. I thought the kitty turned out cute. I colored it with prismacolor pencils and baby oil and blending stumps. I love this coloring method!

I went to my friend's house on Saturday night, and worked on my honeymoon scrapbook. We went in 2006, and I started the book almost a year ago. I'm not good at laying out scrapbook pages, so I'm just layering and sticking...Not creative, but I'm beginning. I'll post some of those pictures eventually.

Thanks for reading!
Posted by Jen at 8:12 PM No comments:

Where Have I Been? 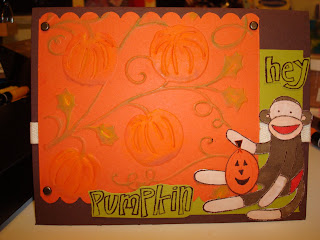 In case there's anyone checking in somewhat regularly, you have noticed that no recent posts have been added since the beginning of the month. For one, I'm still exhausted after work, and two, the little ankle biters have already gotten me sick which doesn't help! I did manage to pump out a card, though I'm not really satisfied with how it turned out. It's ok, but not what I wanted. If you like it, thanks. Send your address and I'll mail it to you. :) It's a new Cuttlebug embossing folder colored in Stampin pastels chalks from Stampin Up. (I'm a demo if you didn't know!) The sock monkey is a new set i have had for a couple months, and yet to use. I thought he'd be cute with a pumpkin...
Posted by Jen at 12:22 AM No comments: 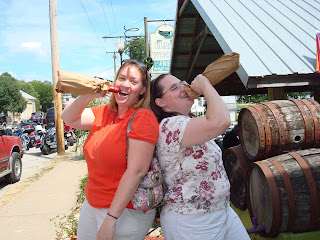 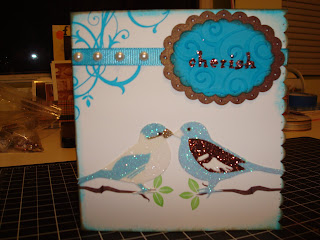 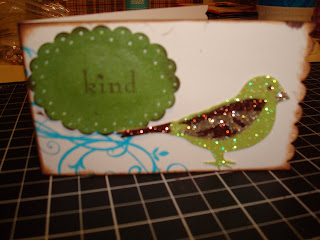 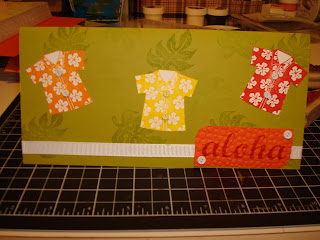 I've not posted in a while! I've been getting my classroom ready, and started back to work a week and a half ago. It's draining with 3 year olds! I came home and ate dinner, and crashed for the night for the first week! I have some good kiddos though, so I'm looking forward to see how far we go!

Anyways...I have some new photos to post of cards I've made. I haven't used my new room as much as I would like. I have tons of ideas, but like I said, I've been way tired at night. The top 2 are Martha Stewart glitter stickers from Wal-Mart. I thought they were pretty, and liked the colors. The cherish one is for my mother-in-law to give to her friends for their anniversary. The single bird one was a thank you for my mom for watching our critters while we were on vacation. The aloha one is for a family friend who is retiring and having a surprise party later this afternoon. On the inside I wrote, aloha (goodbye) work, aloha (HELLO) retirement!
I thought it turned out cute for a quickie! I made another one too, but I can't post it. I'm doing a secret sister thing on SplitCoast Stampers. She would know it was me if I showed it here and she saw it, and it'd ruin the surprise.

For kicks and giggles, I'll put one more picture up. This is my friend Erin and I outside a winery on the Great River Road near Alton, IL. We tasted wine, and both bought a bottle, so we're acting like we're boozing it up on the sidewalk outside. I thought it was pretty funny.
Posted by Jen at 2:19 AM No comments:

Jen
I'm a Stampin' Up demonstrator to support my habit, er...hobby, for the most part. I don't think it's working, cuz I probably spend more than if I weren't! :) I have had a couple parties, and accept outside orders. I have 4 kitties...yes, 4. More than I ever intended to have! Three of the four are adopted strays, two of those three found me, instead of me finding them. (Follow all that?!?!) I try to post when I can, but isn't always often. I'm not savvy enough with this stuff yet! I am a pre-k teacher for 3 year olds, and in the second year of my district job.